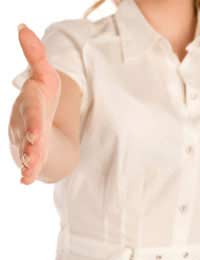 Gestures are often specific to the country or even region in which they are found, so this is one form of communication that could very easily cause confusion or even conflict as you travel the world. Similarly, while handshakes are a common form of greeting in the United Kingdom, they are not always employed, or engaged in by women, in other cultures. To avoid inadvertently offending anyone while you travel, read up on the general culture of your destinations and the specific rules that may govern female behaviour and body language.

Hand gestures are not universal so a gesture that means something in the UK may mean something entirely different in another country. For example, holding up a 'V' with the palm of your hand facing you is rude in the UK, but it is often interpreted as a 'peace sign' or 'V for victory sign' in North America. Similarly, pointing at something with your index finger is common in the UK but in the Middle East and Asia this may appear impolite. The gesture perhaps most misused, however, is the hand sign in which the thumb and index finger are circled. In some countries this may signal 'OK' or agreement, but in other countries (Brazil and Germany, for example) it is viewed as obscene while in others (for example, Japan) it may be translated as referring to money and in yet others (for example, France) it may be translated as 'zero'. Obviously hand gestures then can be an inefficient means of communication while travelling abroad.

In most countries the meanings of hand gestures do not change depending upon the gender of the person making them. However, women should remember that in other cultures the voice of women may be restricted and this includes hand gestures. Therefore making hand gestures may be seen as a woman attempting to have her voice heard in another manner, or it may be interpreted as a woman attempting to 'boss around' other people with her gestures. While there is ultimately no way that a woman can tell how others will react to her words and gestures, for the most part women can mitigate the effects of their communication by understanding the wider cultural contexts.

Though Western business practices such as shaking hands have become fairly standard throughout the world, in social settings how women greet others is often still guided by custom. In Asia, for example, bowing may still be accepted between social acquaintances and in the Middle East a woman reaching first for a handshake, or even expecting one at all, would usually be inappropriate. In many religious areas, physical contact between the sexes is forbidden which includes what Western women might regard as innocent handshakes. As a general rule of thumb, women travelling abroad should always follow the lead of the person they are meeting to determine what type of greeting to use, as well as watch local women to determine the correct custom for greeting other women as well as men.