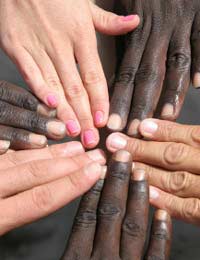 Dealing with racism while travelling will never be a fun experience. Depending upon location there may be common misperceptions of people of a certain race, benign curiosity of people of a certain race and even specific stereotypes of women of a certain race. You will always have multiple options of how to deal with these situations. Among other things you can report racism to a relevant authority, educate people on your own or try to ignore it and enjoy your travels. Whatever you do, make sure that you are safe and are not compromising your own health and safety to tackle racism while travelling.

Just as at home, racism can take many forms while travelling. Some people may hold misperceptions of an entire race. These misperceptions may be flattering or unflattering, but carry racial undertones. For example, someone may state that a person is intelligent or unintelligent based solely on their race. Some people may have little experience with people of a certain race and therefore have a benign curiosity upon first encounters. For example, someone may ask what a specific type of hair feels like or if skin is the same colour all over without meaning any offence. Some people may also combine race and gender to discuss certain stereotypes of women of a certain race. For example, women of a particular race may be assumed to be prostitutes or to have money or to defer to male relatives on all matters. Sadly, many people may feel at liberty to explore these stereotypes with foreign women, particularly those who travel alone. Doing some research on an area before leaving home should help you better understand if racism will greet you upon arrival and give you some time to formulate specific plans for coping with it if it does occur.

Coping with Racism While Travelling

Women have many options for coping with racism while travelling. Racism that is encountered in a professional capacity, such as from a tour operator or restaurant owner, may be able to be reported to a higher authority such as a tourism agency or restaurant trade organisation. Putting such reports in writing and including as many details as possible, including dates, times, what happened and who else witnessed it, can help to have them taken seriously by the relevant authorities. Women may also consider educating against racism when it occurs. For example, females who are assumed to be deferential to male relatives might explain that they are independent adults travelling on their own in order to explode that stereotype. This can be tricky, however, in that the place of women in a given society might be such that anything a woman says can be ignored or even thought of as lies. In some society these attempts at education may even be thought of as impertinence or a woman overstepping her rightful place. If you travel to an area where you know this to be true, it might be better to try ignoring racism abroad and attempt to enjoy your travels anyway.

Protecting Your Own Health and Safety

Females travelling abroad must be aware of their health and safety at all times. This is particularly true when a woman is contemplating how best to respond to racism. While it might not be in your nature to ignore blatant racism, it will be in your best interest to assess your health and safety should you decide to confront it. Walking away from a direct confrontation does not mean that you have allowed racism to flourish as there are still many ways to tackle that racism later, from a safer location. However you won't be able to do this if you compromise your health and safety at the time of the racist incident.

Dealing with racism abroad is still sadly an issue that female travellers will have to think about. Racism may be encountered in many forms while travelling, and there are many options for women to cope with this racism, but women must protect their own health and safety at all times while travelling even if it means ignoring racism at the time that it appears.