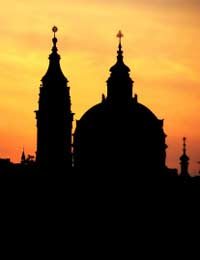 With Europe right on our doorstep it’s no surprise that many women travel to Eastern Europe for shopping, sightseeing, dental procedures, medical procedures, hen nights and more. If you are considering travelling to Eastern Europe be sure to acquaint yourself with female fashion in the area, how to cope with unwanted male attention, how single female travellers are viewed and what to do in the event of political unrest.

Female fashion in Eastern Europe can be quite different to what women in the UK wear on a daily basis. Extremely feminine clothing, including dresses and skirts, tighter clothing and clothing embellished with many details such as ribbons, bows, and sequins are often the norm for women in Eastern Europe. When you travel the region, you might want to consider dressing up slightly more than normal as jeans and runners will almost certainly mark you out as a tourist.

Male chauvinism is often described as being alive and well in Eastern Europe, and it can manifest itself with men giving women attention whether they want it or not. For some women this behaviour is expressed in agreeable ways, such as with men holding open doors or pulling out chairs, but for others it is expressed in negative ways such as with men telling women to do things instead of asking or making decisions without consulting women. Often the simple acts of smiling at a man, making eye contact or even bumping into him in a crowd can attract unwanted attention, so women should avoid these actions if they do not want to deal with the consequences.

Many Eastern European women would not travel alone, but would rather wait to travel with friends or family, so while seeing lone Western European women touring the area is nothing new it may provoke comments from local men and women. There is usually no danger associated with travelling as a single woman in Eastern Europe, but joining a tour group might help you feel more comfortable while travelling the region. Wearing a fake wedding band and/or carrying a picture of a man that you can describe as your husband may also give you a feeling of security.

In the past Eastern Europe travel always included an element of uncertainty about the local political systems. Many countries where Soviet satellites and tourism was restricted. Today tourism is booming in Eastern Europe but some areas are still experiencing growing pains when it comes to their governments and even independence. Women travelling to Eastern Europe will likely hear of any political unrest over international news channels, but checking on Foreign Office travel advisories is always a good idea too. If you do find yourself in the midst of political unrest, contact the nearest consulate or embassy immediately for further instructions. Staying inside your accommodation and away from any violence is also advised.

Eastern Europe is a popular travel destination for British women. If you are considering travelling to Eastern Europe, research your destination thoroughly and speak with tourists who have recently returned.